Beyond Christmas: The Pagan Origins Of The Yuletide Season

Beyond Christmas: The Pagan Origins Of The Yuletide Season

To many, hearing the words “Yuletide Season” means one thing: Christmas time! But at with all things, everything is not all it seems, and known to only those who would do research, the yuletide season, or Yule, actually has pagan origins, and is not just about the holiday we know as Christmas.

One of these points is the winter solstice, which occurs during December 21 and marks the start of the winter season, and is the shortest day of the year. Because of this phenomenon, ancient civilizations have placed it in such a high regard, celebrating it by building monuments, ceremonies, and more.

Many cultures celebrate Yule as one of the low points of the wheel of life (winter) and that at that point, there is something to celebrate as with the low point comes the celebration of life and rebirth at the end.

Effects on other civilizations

Yule has been interpreted and celebrated by different cultures in their own unique ways; these religions are often referred to as pagan these days. The Romans, for instance, celebrated Saturnalia, a feast for the god Saturn, who is the god of agriculture and harvest, Juvenalia, a feast for the children, and the birth of Mithra, one of Rome’s most sacred days. Coincidentally, Saturnalia is celebrated for a week from December 17-23, and the birth of Mithra on December 25. Sounds familiar doesn’t it?

The Norse also celebrated Yule, which started on December 21, exactly during the winter solstice, all the way through January. In fact, the Norse’s Yule celebration is what is most known all over Europe’s pagans today, with the early European pagans celebrating solstice with Newgrange tomb and Stonehenge. The Scandinavians knew that the sun’s return from winter signaled new planting and harvesting, and a celebration of plenty rather than lean.

Today, Yule is celebrated, as mentioned, by most modern countries as Christmas season. But even this is influenced by pagans. For instance, Yule is a 12 day holiday, which starts on December 21, and ends 12 days later, on Yule night. This 12 day celebration is the source of the beloved idea of the “12 days of Christmas.”

The reason why Yule is celebrated by Christians all over the world is that, early Christians, wanting to convert pagans to Christianity, adopted the pagan holidays as their own, to make it more acceptable for the pagans. For instance, many scholars already proposed that Jesus Christ wasn’t born on December 25. You know who was celebrated to have been born on December 25? Rome’s Mithra. And that is just an example.

So this Christmas season, think of Yule and its origins, and be more informed of this most festive of holidays! And what better way to make your festive season even more solemn than with a Winter relaxation track. 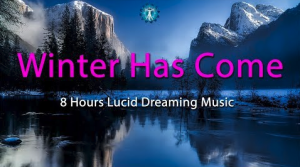 Enjoy our latest Lucid Dreaming music “Winter Has Come” created to help you achieve deep sleep and have a lucid dream. It also promotes deep relaxation, dream recall, and even vivid dreams. Using a complex series of binaural beat and isochronic tone frequencies, we have divided this music track into four parts. The first part will bring you into a state of deep relaxation. The second part starts in the Theta range and drops slowly down to the Delta, where deep sleep and lucid dream frequencies can be found. The third and fourth parts will continue to flow up and down these Theta and Delta range focusing more on enhanced inner awareness of the subconsciousness that will help create the dreamscape.